This time of year beer goes all malty. Brewers see the nights drawing in and think ‘let’s brew something brown, sweet and lacking a prominent hop flavour’ I’m different however.

After a conversation with a friend a prolific home brewer (who is also a hophead), we decided to have a “brew-off” to see who could produce the most interesting seasonal ale. My friend and I are amused at the autumn ale style of beer particularly their names. Mahogany something, Ploughman’s, Chestnut whatever, Brown whatsit, Conkers Bonkers; you know. So the aim was to make a seasonal ale that is dark brown with a autumnal name, but with a twist!

I brewed my attempt earlier on in the week. It is a simple recipe of pale, crystal and chocolate malts with the twist being it is hopped with buckets full of Chinook. I have never brewed with Chinook before but have tasted plenty of beers that use it and a couple that use the hop as a single variety. I severely enjoy this hops’ grapefruit aroma and its intense bittering qualities (not sure anyone can 'severely enjoy' something but that's not the point; they are nice hops although a bit expensive ). I’m not sure how it will work in a beer this dark but I am happy with it so far. It has nearly come to the end of its primary fermentation and looks like mud (not that attractive), the smell it emitting is something else: citrus, spice, elderflowers and a hint of sweetness, lovely! I don’t think everyone’s going to like it, but I have a hunch it will sell well as a tonic to the hop-shy malt-bombs that dominate the hand pumps this time of year.
Posted by tommy n at 09:13 2 comments:

Hops, Barley, Weeds and the Weather 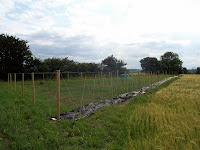 I spent most of yesterday setting up part of a makeshift trellis for our 200 Hop plants. We have only just planted them so we are not expecting anything this year. At the moment we are just trying to get some mulch down and keeping them well watered. The trellis we have built is small, only 7feet high. We hope this will only affect our harvest slightly, and that this will be out weighed by the 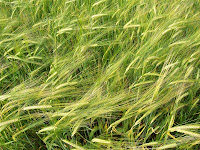 money saved doing lots of the work ourselves, including picking.

Yesterday also gave me the opportunity to investigate how are barley is getting on. Weeds are a bit of a problem but the grain looks healthy. Hopefully we will be able to malt it once it’s been harvested. However if we have to much rain around harvest it will not be suitable for malting and it will all go to feed some cows. For now though those hops could do with some water. 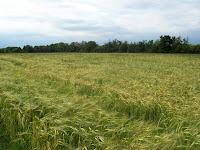 I’m of on holiday to Dorset tomorrow (in a tent) so I, unlike those cone producing vines would like unbroken sunshine.
Posted by tommy n at 14:24 1 comment:

This weekend was spent at the in-laws (well, not yet). Having looked at some of my very old posts, it would seem that I spend most of my time in Hampshire. This is not true, what is true though is that when I’m down there I try and visit some of the very nice pubs in the surrounding towns and villages.

As always I had to make a return to Triple fffs’ Railway Arms in Alton. I have talked about this place before and I still feel the same about this place; it’s fantastic, if not a little cramped. The only real draw back it this pub id getting served. The staff are quick and efficient but the always occupied bar stools get in the way. In a pub where you know the locals and might have to squeeze past them, have a chat and maybe even buy one another a drink on the way to the bar is nice and adds to the experience. However in a less well known pub having to barge past, or stand in the middle of a bunch of regulars who are having a conversation can be awkward. Still this is a great pub and if you happen to be in Alton (why?) give it a visit. The champion beer of Britain, Alton Pride was in good form as was the Pressed Rat and Warthog. There new beer Apache Peacock went down well, it’s a fruity blond beer with a good earthy base and a slightly citrus tang. A good mix of English and American Hops me thinks.

While in Alton I popped in to Waterstones and bought Pete Browns new book Hops and Glory. I’m only 70 pages in at the moment, but its a great read so far, packed with facts and building up to his [Pete Brown] adventure across the seas to deliver a pin of IPA from its birth place Burton-on-Trent to India. All this reading made me hungry (and thirsty). When we arrived back in Suffolk I ordered a curry to accompany the Goose Island IPA I has bought at the Hogs Back Brewery shop earlier in the day. A great combination inspired by the book. With the weekends eating and drinking now over its back to some good old hard graft to burn all those calories.
Posted by tommy n at 12:17 No comments:

It's all in the planning 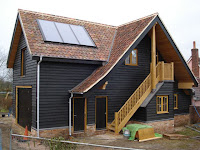 This morning the whole family were at Babergh District Council offices at a planning committee meeting.

When we first wanted to build a micro brewery we went though the proper channels. The site, at the time, was an old stable block that had been all but blown down in the 87 storm. The stable was rebuilt using bits of ply and corrugated iron; it didn’t look good. So we planed to build using what there was left of the original structure and then add to it. Local planners saw this as a change of use and extension rather than a new build, so we applied for planning permission and it was granted.

During the building progress we made some minor alterations, these included solar panels, velux windows and moving the staircase outside. When, however, we applied to make these minor amendments the planning offices realised that we should have applied for a new build rather than a change of use. We where informed we must reapply.

On the whole the village is in full support in what we are trying to do. Our main aim is of cause to keep the pub open as well as selling a good selection of local ales and local home cooked food. But there is one or two who feel a busy pub will affect their house price, so will go to great lengths to cause problems for us.

This morning that minority didn’t even bother turning up at the committee meeting. After a few hours watching local politics in action (rather slow action) a decision was to be made. In the end the planning offices recommended planning permission was granted and all council members agreed. Yippee! This whole sager had been going on for to long; we were building when Jeff/Stonch visited for Eddyfest 2 years ago. At last we can stop worrying about a few nimbys and start brewing some more beer!
Posted by tommy n at 16:58 No comments:

Today I’m brewing our weakest beer; Mawkin Mild at 2.9% ABV. Everything seems to be happening slowly today. Having casked up a load of beer to make space in a fermenter for today’s brew, I realised that yesterday I must have taken more heat out of the store than I’d thought. This means lighting our wood boiler to bring to store up those few more degrees I need to mash at 66°C sparge at about 78°C and then final heat to 80°C+ before the boil. 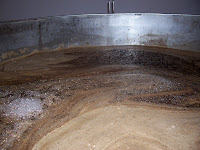 As for the beer, well it’s black (almost) and modestly hopped with a Fuggles and Goldings. The malt gives this beer its flavour. I think its 11 different types I all, lots of dark malts give it a good roasted flavour, while I use malted oats to impart some body. I had no idea what this would turn out like first time I brewed it, but it was good (well, I liked it, so it was good).

Mild is not an easy sell to the free trade but we sell it all the time in our pub and a few outlets take the occasional cask and of cause it fly’s out at CAMRA beer festivals. Some people bemoan CAMRA and their beer festivals but without them small breweries would less adventurous in the styles of beer brewed. Unless a brewery is into bottling in a big way it will struggle to sell beers that aren’t brown or gold between 3.5-4.5%, beer festivals give these beers an outlet. For that I forgive the socks, sandals beards and farts!
Posted by tommy n at 12:22 3 comments:

On the plus side the solar panels are collecting those rays; these are connected to a heat store which is used to heat the water used for cleaning and the liquor used for brewing. At the moment the 3000L store is at about 80°C, sure that will come in useful. We have an interesting setup here involving solar panels, a wood boiler, heat exchangers and pipes running though that heat store to heat the liquor to various temperatures during the brewing process. One day I’ll explain it all on here, but for today back to spraying smelly dregs with solar heated water.
Posted by tommy n at 12:58 No comments:

Hopefully lots of interesting stuff will be happening over the coming months; otherwise this blog will become a bit dull. I hope to be able to update regularly on goings on in Mill Green Brewery and the White Horse. I will also be sharing my opinions on various debates in the beer world and maybe talk about some nice pubs I visit and great beers I try (and maybe some not so good). On top of this we I will be looking at some new projects that I’m involved in.

Over the past few months the family and I have been working on growing our own ingredients for the brewing process. We have a 14 acre field and have planted some barley that we hope to malt, either ourselves or by getting someone else to do it. We have also, in a corner of the field, planted 200 hop plants (25 of 8 varieties). Although the harvest this year will probably be non-existent we hope, in the long run, this will save us money as well as being a great selling point for the beer. I hope through this blog I will also be able to chart the progress of my family’s first tentative steps into farming.
Posted by tommy n at 11:01 No comments: