Born in Bury-St-Edmunds (or BSE if you must), one might expect me to be proud of Greene King's historic brewery which dominates the town. With its small winding streets, abbey gardens punctuated with ruins and a recently renovated cathedral, Bury-St-Edmunds is a some what picturesque place to visit. People of Suffolk are understandably proud of this interesting town but should they be equally proud of its famous brewery?

Greene King has recently been heavily criticized for its takeover and subsequent closure of Hardys and Hansons brewery in Nottingham and its removal of Harveys Bitter from the Lewes Arms after its takeover of the East Sussex brewer. The local residence in Lewes has boycotted the pub in protest and I sympathise with them completely. It seems to go against all common sense to sell a beer brewed hundreds of miles away when a far more superior product, in my opinion, can be sourced just down the road (literally).

Greene King beers are brewed for people who enjoy ale but not for real beer enthusiasts. Of GKs main brands I find GK IPA bland and very uninspiring, Abbot is an OK to good premium bitter and Speckled Hen is not the same since its ABV lowering. Some of their other beers are better: XX Mild is highly enjoyable and Suffolk Strong is a wonderful example of its style. But they do not brew these or any of its quality purchased brews on a large scale. I don’t believe interesting beers are GKs mandate. Porters, Stouts, Milds and Old Ales are not what GK are about. GK IPA is the flagship beer and it is ok for regular ale drinkers, but not for me.

As a Suffolk boy I am proud of the county’s many micros breweries and the regional brewery, Adnams. Choice can be found, even in GKs homeland. Real Ale focused free houses in Suffolk have local breweries suc 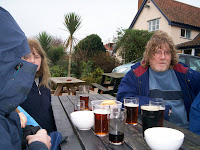 h as Green Jack, Victoria, St Peters, Batrams and Cox & Holbrook to choose from. Just over the border in Essex; Nethergates and Pitfield breweries can be found and Norfolk is overflowing with micros. Add Crouch Vale, Woodfordes and Elgoods to that list and choice seems impressive.

Even down the White Horse the best selling beer is GK IPA. I don’t know why when Adnams Bitter and a Mild are always available. I guess people stick with what they know and what is advertised to them (hence the popularity of bland keg lager).

GK sell Real Ale in a rather bland form. If enough people demand a choice of challenging and varying styles of beer then micro/craft brewing revolution will stay alive. Choice is there, but it might not be at your local if your local is a GK pub, this is the shame. I say search out a quality brew in a quality establishment, it’s worth the effort. Even in BSE Old Cannon Streets brewpub makes class beer an option. GK is not that big!
Posted by tommy n at 19:59 3 comments:

Welcome to Tom’s Beer Blog! I love beer. Luckily for me my father owns a pub (The White Horse, Edwardstone, Suffolk). There are also plans for a micro brewery to be built next to the pub.

I already make Cider (Castling Heath Cottage Organic) with my family on a small scale (500 gallons a year) and now wish to become knowledgeable in the process of brewing beer, as to help in the brewery. This is going to be difficult enough, but the plan is also to make it a Carbon neutral brewery and to make it as environmentally streamlined as possible. The pub became the first in the UK 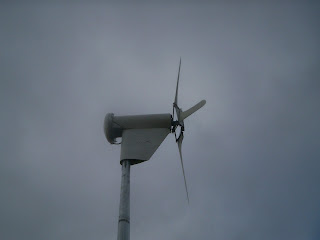 with its own wind turbine when it was officially switched on by Tim Yeo MP a few weeks ago.

This blog will chart my journey from beer lover too competent brewer (hopefully). It will also contain articles about pubs and festivals I have visited as well as beer and cider reviews.

I hope my blog will be of interest to any one who is interested in Real Ale, brewing, pubs or environmental issues.
Posted by tommy n at 18:36 No comments: